skip to main | skip to sidebar

Orantes of the Assumption

Francis Picard was born on October 1, 1831 in the small village of Saint Gervasy, in the south of France , to a catholic family.

His father was a farmer and his mother owned a grocery. He had a younger sister.

When he was 8 years old, he thought about joining the priesthood and doing missionary work.

When he was 13, he studied at Assumption College in Nîmes, under the direction of Father d’Alzon.

Francis was curious and eager to learn. He was a bright student.

Father d’Alzon was thinking of starting a foundation to extend the kingdom of God both within and around us.

1845 was the foundation of the Augustinians of the Assumption.

In 1850, Francis entered as a postulant in the Congregation. He made his perpetual vows in 1852. He studied theology and was in charge of an orphanage. He contracted tuberculosis as a result.

In 1855, he went to Rome to continue his theological studies.

In 1857, he went to Paris to become a Novice Master. They lived near the Religious of the Assumption who helped them.

In 1860, they transferred to another place in Paris (Francis I Street). It became a spiritual center, many people came to the chapel.

In 1870, war broke out between France and Germany. Father Picard presided over temporary hospitals of the Little Sisters of the Assumption.

In 1871, there was civil war in Paris, some priests were killed. Father Picard tried to save lives while also sustaining the works of the Religious and the Little Sisters of the Assumption.

He created an association to defend the Pope and the church, which was under heavy criticism in French society.

To encourage young people to enter religious life, he opened 9 alumnates in France, in addition to Belgium, Chile…

In 1872, he was asked to organize a pilgrimage to La Salette.

In 1873, he organized a pilgrimage to Lourdes; many pilgrims came from different countries, and it continues to this day.

In 1882, he organized a pilgrimage in Jerusalem, 1000 people came. New communities would open there as a result.

In 1876, French society was against the Church; no more religious classes were held, and many religious congregations were expelled from France.

A magazine called “Le Pelerin” was founded and distributed weekly, to inform people about God.

In 1880: “La Croix” is established, and distributed every day, criticizing religious persecution.

In response to the violent, anti-religious forces that were tearing crucifixes from classrooms walls and preventing crosses from being placed as gravestones, Father d’Alzon proudly used the crucifix as the symbol of the magazine.

The expulsion of his religious order from France was imminent, he started planning their evacuation to Spain and England. Police forced the religious order to vacate Francis I street.

Visiting the novices in Spain, Father Picard had an accident, sustaining a permanent leg injury.

“He had complete control over himself and his initial reactions. Father Picard was quick by nature, but from the day he injured his leg, he fully accepted the life of dependence that he had to live for 21 years. He never complained nor let it be known that it bothered him in the least as he went about his duties as Superior General. He remained calm, serene, abandoned to the will of God, attentive to use anything that might make him practice mortification. Alone or in the company of others, he remained the same... he was at peace, troubled by nothing”. (Testimony of Father Andre Jaujou, 1910)

In November 21, 1880, Father d’Alzon died and Father Picard was elected Superior General at the age of 49.

He continued mission work in the Orient. He also founded communities in Russia, Chile, New York.

1900 : the Congregation was no longer allowed in France. He founded new communities in other countries: Holland, Belgium, Israel…

During this time of persecution, he was sustained by the prayer of the Orantes of the Assumption, which he founded in 1896. He was the spiritual director of Mother Isabelle, the foundress.

In 1894, he created an association to help seamen.

“God was above everything else in his thought and in his heart. And in all circumstances, he had only one desire: to be sure of God’s will and to carry it out without reservation or weakness, because God is the Master. We should do God’s will before all else”.

For hours and hours, we could gaze at him absorbed in a divine conversation. In the midst of a very active life, he gave a lot of time to prayer. It was in that intimacy with God that he found his light and his admirable energy”. (Testimony of Father Aubin Colette)

His personal charism was to unite prayer and action. Father Gervais Quenard

Above all, he made sure that souls remained faithful to and did not deviate from what God intended for them. And that was the secret of his extraordinary ascendancy over souls. People saw him as God’s mediator. Mother Isabelle

It was no long, but the response was precise, enlightening, and always calming. Father’s spiritual direction was austere, but it was also accompanied with great simplicity, kindness, trust, and broadmindedness. One could say anything to Father: he wanted complete frankness. He greatly respected whatever appealed to a soul. He knew how to patiently wait a long time for a soul to see the light, but as soon as it did, he brought the fruit to maturity without procrastinating. In the face of cowardice, Father remained inflexible and his will, united with God’s, would triumph over the resistances of nature.

I spoke to Father about it at times, but rather rarely. In principle, Father Picard could not imagine a ready-made undertaking. He would think, act under the inspiration of the Holy Spirit, study the circumstances, seek to discover God’s intentions in their regard, listen patiently to what he was told, to both the pros and the cons, and above all, make sure that the soul was faithful. Also, he used to say that a work was never completely carried out just as it was first conceived. Mother Isabelle

Everything should lead you to an interior recollection that speaks to God, that acts for God, that listen to God. 1896

The mystery of the Eucharist is the one to which I invite you the most. 1896

We are religious and nothing else but religious. Our goal is to extend the Kingdom of Our Lord in souls, and that is our sole ambition. 1900

Prayer is indispensable. It alone can bring to fruition among us the plans of Our Lord; outside of it, I find weakness, sickness, and powerlessness.

The Eucharist is the center toward which everything converges in the Church.

Before the tabernacle, it is there that one learns how to become real daughters of prayer. We exist only to obtain the extension of his Kingdom.

In religious life, you must be apostles, that is to say, you must make Jesus Christ known. Let us be men of prayer and apostles. Everything else is of little value.

Foundation of the Orantes of the Assumption:

I am preparing a small foundation... I believe that God wants Assumption to grow and that, after including persons who educate the rich, care for the poor, and become missionaries, it is time that it include some who dedicate themselves to prayer and study. In this way, we can support each other.

On December 8, 1896, Father gathered a small group that had been meeting for a long time, a group he had chosen for the dual purpose of contemplation and of uninterrupted prayer for the fruitfulness of his works. The Countess of Ursel, foundress and first Superior General of the Orants was there with her first daughter to be trained in the monastic practices. Father Picard had entrusted this care to Mother Marie of the Compassion, Oblate of the Assumption.

I have the firm conviction that Our Lord wants the little work we are starting, and that he inspired it. He leads us along obscure paths, but toward a goal that is sure... Let us abandon ourselves to God’s plans, let us proceed slowly at the present time, since that is what he wants, and let us be ready to go forward rapidly when it pleases him...

I don’t like devotions that turn souls in upon themselves... Forget yourselves... Don’t lose your time thinking about yourselves.

Pray, recollect yourselves, humbly prepare yourselves for the apostolate to which you might be called later on...

To provide his religious family, his ardent missionaries spread throughout the world to extend the Reign of Our Lord, with the permanent assistance of the prayers and sacrifices of contemplative religious souls. Livry, 1895


﻿
Publié par Orantes of the Assumption à l'adresse 2:55 AM 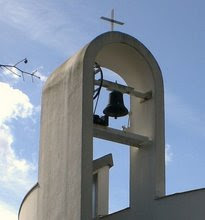 The Orantes of the Assumption

Great changes characterized this period : the first industrial revolution with its social questions (the misery of the working class), the abolition of slavery, differents important inventions, an intense missionary activity and also de-christianization, secularism.They noticed the lack of faith in lycees and colleges and the importance to give education to christianize intelligences. 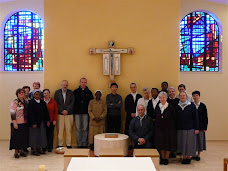 family of the Assumption

A life of prayer lived in community
at the heart of the world.
We were founded in 1896 in Paris (France) for a mission of prayer in the Church.
We are a branch of the family of the Assumption, we share the same motto :
Adveniat regnum tuum,
we exist to pray for the coming of the kingdom in us and around us.
The rythm of our life is : four liturgical offices, Eucharist, adoration, personal prayer, studies, spiritual reading, lectio divina, part-time work (professional, pastoral...) 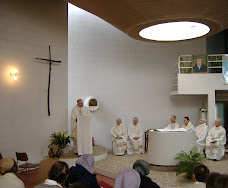 Our prayer is apostolic :
for the intentions of the church, including those of the Assumptionnists.
We are apostles to make Jesus-Christ known : apostles especially by prayer and apostles by external work.
We would like
*to encourage people to prayer, to transmit the faith and the ways of the spiritual life, to help others to enter deeply into prayer
*to be in communion with the lifestyle of simple people, sharing joys and sorrows with them,to establish fraternal bonds with those close to us
*to be present to the materially and spiritually poor.


Communion, passion for the kingdom and spirit of adoration are three main points of our life.
Jesus-Christ in the Eucharist is the center.
Our communities are eucharistic homes, open to others. We share liturgical prayer, meditation, adoration with them.
To pray every day before the Blessed Sacrament exposed, spreads eucharistic life in all the apostolic works. 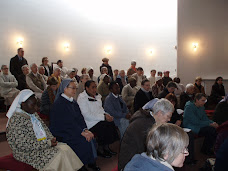 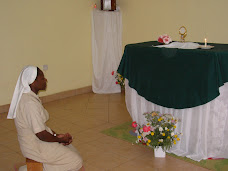 Our spirituality is christocentric but we cannot separate Christ from that wich he loved most : Mary and the Church.
As for Mary and the disciples, the Lord ask us“to be faithful to the teaching of the apostles, to the brotherhood, to the breaking of bread and to the prayers” (Ac2,42) 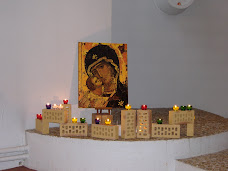 Saint Augustine is our spiritual master.

“Our life is rooted in the Gospel through Augustinian spirituality. It is a life of seeking for and adoration of God in fraternal community in truth and charity, humility and joy, simplicity, work and sharing”
(rule of life of the Orantes of the Assumption).

Prayer and work are integral parts of all contemplative life.We wish to make of our life a continuous prayer throughout all our activities.

We are located in Europa (France, Belgium), in Africa (Ivory Coast, Democratic Republic of Congo, Togo, Niger, Kenya, Tchad, Tanzania, Burkina Faso), in Madagascar, Argentina.
We are going to found in the Philippines in 2010. 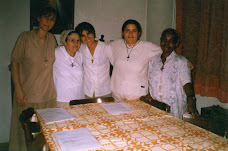 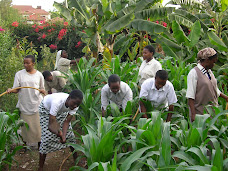 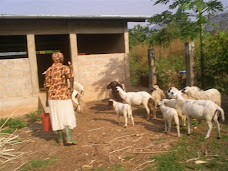 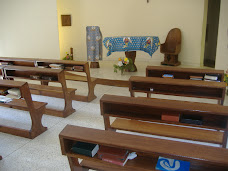 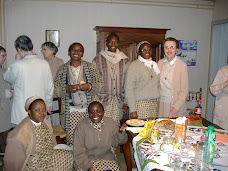 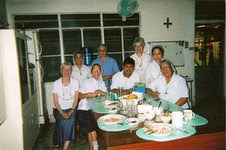 Manille, family of the Assumption 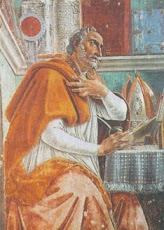 The Confessions of St Augustine